Calculus examples are boring. "Hey kids! Ever wonder about the distance, velocity, and acceleration of a moving particle? No? Well you're locked in here for 50 minutes!"

This is a companion discussion topic for the original entry at http://betterexplained.com/articles/understanding-calculus-with-a-bank-account-metaphor/
michaelfmartin March 16, 2011, 5:47pm #2

Compound interest is also an interesting way to introduce the binomial expansion. 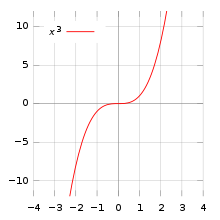 In differential calculus and differential geometry, an inflection point, point of inflection, flex, or inflection (British English: inflexion) is a point on a smooth plane curve at which the curvature changes sign. In particular, in the case of the graph of a function, it is a point where the function changes from being concave (concave downward) to convex (concave upward), or vice versa. For the graph of a function of differentiability class C2 (f, its first derivative f', and its second deriva...

On the main theme, would a paycheck and banking analogy really be more interesting to kids than physical motion (as in sports and rocket ships)?

I remember when I was in high school, I openly mocked my mother for reading the Business section of the newspaper.

(Nowadays I resent the paper for printing the Sports section.)

@Michael: Great point – I’ll have to keep that in mind when writing about the binomial expansion :).

I’m being a little facetious, but I think the idea of a bank account / income / raise is more approachable. Most physics examples I saw tended to be “Let’s track the trajectory of a ball” and inevitably require more new concepts to get going (What is force? Gravity? Acceleration? Velocity?). But fun may be in the eye of the beholder :).

Dude, you are awesome. How I wish I had these when I was younger. Keep up the great work!

@Marcio: Thanks for kind words

The thing about physics is that it’s more appropriate for describing continuous variations. Money is a discrete process and thus a case of non-continuous variations…
But I agree it is a nice view to explain it, and maybe link it to the boring use made in physics (probably because it’s always presented in the same way…).

ingenious!
it’s true that a lot of people get bored by the direct physics application of calculus if its introduced too soon
money seems like a natural way to understand it
of course… it might not be able to so easily give an intuitive understanding of the more grainy aspects of calculus, but whatever, thanks!

@Johann: Thanks for dropping by, and great point about continuous vs. discrete. The funny thing is that many physicists treat the formulas as “discrete” (i.e. using infinitesimal dx, dy, dz quantities to make a 3d cube, for example) and then “let it disappear” to make it continuous again. The neat thing is that using discrete quantities really shows how the error margin is there (the difference between the actual sum of squares and 1/2 * x^2) and how limits / Riemann sum help us shrink this.

I agree though, that physics would be cool if it were shown to be an example of these general principles (and not the “definition” as is often seen).

@Prudhvi: Yep, there’s always details that you can’t get to when you make analogies. But you have to start somewhere :).

If someone had outright told me at any point in Calc I or Calc II that the ‘+ C’ can be thought of as an initial condition, I might have actually remembered to tack it to the end of integrals, instead of considering it an arbitrary annoyance that has little context.

That makes so much sense (and yet is so, so, so, painfully obvious), that it’s not even funny.

@MJ: Thanks for the comment - yeah, it’s way too easy to think of the +C as some mathematical details to keep track of, instead of something needed to figure out how to make your model work.

I’ve been following your Better Explained series and forwarding them to friends. I love to read and re-read what you write. My favorite was your explanation of Exponential Functions.

Keep up the intuitive and fun teaching.

@Jeff: Thanks for the support!

I love your belief that 5th grade is the time to introduce these concepts. These basic ideas are way too powerful to relegate to the few who ever make it into calculus. To go one further…why isn’t the concept of the circle and its rotation (sins and cosines) also taught at 5th grade the instant students learn the concept of the square root? (leading of course to that unique number pattern that gives you the values on the unit circle at 0, pi/6, pi/4, pi/3 and pi/2.

You are a genius, and an inspiration to me. your posts are of immense help in my CFA studies.
I can really relate with calculus and understand these financial concepts in depth (compared to just memorizing d formulae).
If possible, could you in one of your posts incorporate more examples connecting calculus (mainly concepts of slope, inflection point)and your favorite and most releveant subject- Money (maybe i could broaden the horizon here calling money as finance)

@Ramm: Thanks for suggestion and kind words! I’d love to do some follow-ups on calculus – I think the key is getting the basic metaphor in your head (raise/interest/bank account) and then seeing how specific ideas (inflection points, slope, etc.) can be understood. Appreciate the comment!

Thanks for your wonderful website! I am teaching myself maths, and it is so useful to have a resource which takes the intuitive approach. Ideas which are inscrutable when disguised in dry formulas and textbooks become clear with your explanations and analogies, and seeing how maths can be explained (i.e. in the way you do it) it amazes me that your style of explanation isn’t the norm. Thanks!